Uprooted is a book that I have waited for. I have seen people talking about it and enjoying it ever since it came out, and I had the vague idea that it was Eastern European and somehow based on a fairy tale, and not really about a dragon. I checked the book out from the library several times but never managed to get beyond the first few pages. It took an audiobook to change that, and then the minute I finished it, well , to be precise, several hours in, I already knew I wanted Spinning Silver.

END_OF_DOCUMENT_TOKEN_TO_BE_REPLACED

Now, I know I don’t talk about this all that much, but I am, in fact, a high school newspaper editor. I love doing this (even though it’s a chief stressor in my life as well) and it’s something I care a lot about. So of course, when I heard about Krystal Sutherland’s book Our Chemical Hearts, where the protagonist is a high school newspaper editor, I was BEYOND EXCITED. I bought the book, read it eagerly–and was sorely disappointed.The way  this story examined the manic pixie dream girl trope was interesting, and I get that it was a tragic love story (though I had a few issues with that too) but newspaper wasn’t a big enough part of the story. 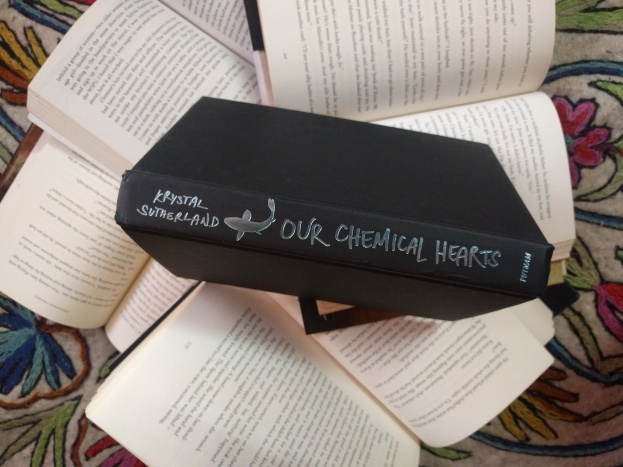 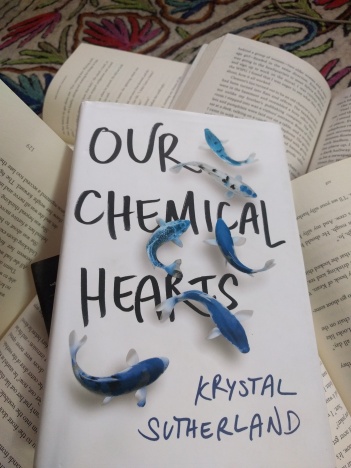 The examination of the manic pixie dream girl trope and the love story worked, though I have quibbles, but the abandonment of newspaper let me down.
Grace *seems* like a manic pixie dream girl. It’s said explicitly–and then the truth is revealed. Manic pixie dream girls (aka, a quirky girl whose role in the story is to bring the ‘ordinary’ boy out of his shell) are ridiculous, so I did appreciate this. Henry is obsessed with her–and she does teach him a lot. But the key here is that Grace’s state of being: sad, frustrated, peculiar, inconsistent–it’s seen as a negative thing. It’s seen as her being broken, and not in a beautiful way. She tells him this. He knows it. He learns it. Maybe she’s a manic pixie dream girl, but she shouldn’t stay that way forever. However, while I appreciate some good trope reversion, this was sort of inconsistent. Grace comes out with these incredibly beautiful, wise statements, and I appreciated the writing, but the message was inconsistent. She was strangely self aware–she kept reminding Henry that he was in love with the idea of who she could be, not her as she was, so it didn’t really destroy the trope.
The love story is not going to go well. It’s pretty obvious from the inside flap: Love is an Epic Disaster, it reads. Henry wants Grace. He loves her. It’s not *quite* instalove, but it almost is. They laugh together and kiss and tease and message and make powerpoints (so the formatting was rather cool), and have sex, and you know it’s going to end terribly, because they aren’t quite right for each other. What I liked about the love story, though, was that there are lots of love stories, all at once. There was Sadie (my favourite character), divorcing, loving her child. Madison, queen, imperfect. Murray, obsessed with this one girl and making a fool of himself. Lola and Georgia are *seemingly* perfect. One thing did upset me, though, and that was the parents love story. The resolution of this in the novel really irked me, but no spoilers.
This book takes place in a bland, New-Englandish town (said the girl who has never been to the US). The setting didn’t even have a name, and that annoyed me. There’s high school, but the love story consumes everything. And while I know that first love can be that way, some of the things I was most looking forward to about this book were abandoned. Like, the newspaper. I read this book for the newspaper, and it was basically a barely developed afterthought. The whole story just didn’t seem quite cohesive. Stuff would happen (e.g. Henry going to Grace’s house), without clear lead up. (I may have been reading too fast?). and the drafts thing on Henry’s phone, what was the point of that? And the random parties? And the drinking? and SO MANY pop culture references. There was no clear flow, apart from the love story, in this novel, and everything (other than angst) just felt a little under nourished.
This book is funny, quirky, and anti-romantic in mostly good ways. But it didn’t work for me, because the tropes were still there, and lots of important things were ignored.

What’s a book that’s disappointed you? Are there any books with a good portrayal of high school newspapers (because believe me, I will read them)? And have you read this one?