Lauren James is very good at surprises, and ultimately that was probably my favourite thing about her new book, The Quiet at the End of the World. The reflections on objects and impermanence were interesting too. I wasn’t entirely satisfied with how she engaged with the ethical implications of some of the topics in the book, but that is okay. Also I am sadly going on hiatus, which I’ll write more about at the end of the post 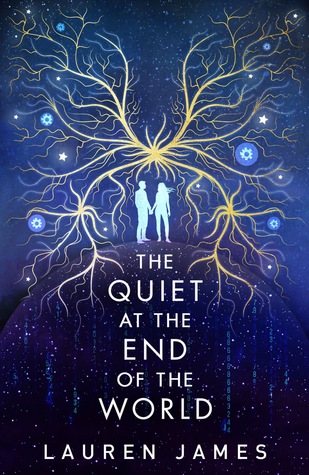 So The Quiet at the End of the World is set in London after the apocalypse. There has been a mass infertility problem which means that the population of the world is about 300 quite old people and two teenagers, the last IVF babies. In terms of worldbuilding this was not rigorous—like, where was the ham coming from?—but that’s a lesser concern of mine. Part of the point of the story is that Lowrie and Shen had been kept in the dark about a lot of aspects of the world they lived in and the story was how they were beginning to realise that. Of course ‘the world is bigger and more complex than I realised’ is a pretty common theme in YA books, and I liked how the parameters of the world-after-people which Lauren James set served to accentuate this theme. The concept—which, like a few other YA books I’ve read, draws heavily on The World Without Us, which is a spectacular and visionary science book—is immediately and effectively intriguing.

Like Lauren James’s other books, particularly the psychological thriller The Loneliest Girl in the Universe, The Quiet at the End of the World is unputdownable. What fun! It’s also pretty short and small (it fits perfectly into pockets or handbags if you’re reading the physical book) and so once you start, it’s hard to stop. There’s a tension thrumming through the entire novel, and completely masterful foreshadowing so that, as you turn the page ou have a few ideas of what to expect, but no certainty if you’re right or not. The main plot twist comes in two parts, and the first totally blindsided me, while the second I figured out a heartbeat before Lowrie and Shen, which is pretty thrilling as a reader. What I loved was how these plot twists completely twisted my expectations of what I thought the book would be about. I loved that.

A lot of this story is about how we make a life, how objects become part of our environment. While I found the logic of the world a bit flawed,  loved how each chapter started with a found object. The concept of permanence and history infuses the book, and ties in so neatly with the conclusions Lowrie and Shen are drawing and where they’re trying to go. The objects were a reminder of the many ways that people solidify ecistence into use and meaning (at the risk of sounding too much like an up-themselves anthropology major), and the discovery which they precipitated was a really lovely part of the story. I especially appreciated how the robot Mitch moved from object to subject. The old social media posts were a bit contrived—social media is often based on the assumption that people know what you’re talking about already, and if this information was just available, why had Lowrie not looked at it earlier? But ‘tis of no matter, because that corollary to the past worked really well.

My main issue with this book is that it doesn’t really engage with many of the issues that it brings up, especiall the involvement of companies in fertility and people. I know that not every book has to engage with every issue that the story touched on, but the way that Lowrie and Shen just accepted the condition of their parent’s existence without question rang hollow to me. I wish that the issue of selling and stealing babies had been better expressed in the social media posts. To me a big part of the story was about commodification of human essentials (if you’ve read the book I’m happy to talk more explicitly with spoilers in the comments), which seemed like a great inequality to me. I don’t necessarily agree with the conclusion of the story (VERY Yuval Noah Harari tbh) but it was interesting, although it didn’t resolve any of the philosophical questions I have to my satisfaction.

So that was The Quiet at the End of the World! Lauren James continues to delight.

Also, a quick announcement: I’m going on hiatus until June, and Shar probably will too. I’m super busy with non-blog stuff, and I feel like Virtually Read deserves better than to be an afterthought for me. Like even for this post, The Quiet at the End of the World looked so pretty next to the Loneliest Girl in the Universe, and I totally forgot to take pictures even though it would have been easy as and now those books are 800 km from me.

At the moment, it’s really important to me that I continue to find joy in reading without feeling the pressure of blogging and commenting around, and I have enough other things going on that I don’t have the time to really engage with book reviews right now. This is really hard for me! But I WILL be back in June, at least for a little while, as we try to figure out the future of this blog.

have you read any books with plot twists lately? also if you have inspiring things to say about blogging to remind me to come back from my hiatus (haha) I’d love that.