Uprooted is a book that I have waited for. I have seen people talking about it and enjoying it ever since it came out, and I had the vague idea that it was Eastern European and somehow based on a fairy tale, and not really about a dragon. I checked the book out from the library several times but never managed to get beyond the first few pages. It took an audiobook to change that, and then the minute I finished it, well , to be precise, several hours in, I already knew I wanted Spinning Silver. 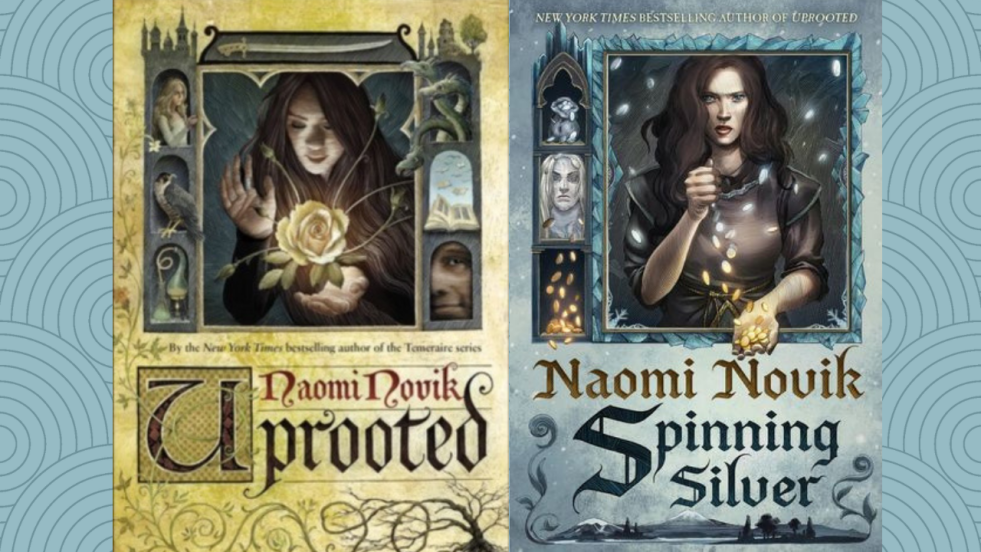 These two books are united by their covers but not much else. I remember vaguely enjoying Temeraire, but I’m not that into the Napoleonic wars, so I never continued with the series. With fairytales though…I can’t believe I waited so long. Spinning Silver and Uprooted might be set in the same story world but really nothing unites them except or their covers; the stories aren’t linked in any way.

Uprooted is a book of trees and and towers and magic; Spinning Silver is a book of wealth and ice and magic. In this sense they are compelling companions, negatives to each other. I like how they are matched. There are so many takes on fairytales, but these ones are more fairydale vibes than specific ones (I guess Uprooted is Beauty and the Beast, and Spinning Silver is definitely Rumpelstilskin). But they are their own stories–Naomi Novik has taken the threads of fairytales, and woven them into a larger quilt.

One thing they both have in common though, is a absolutely compassionate approach to their enemies. I like fantasy books but it frustrates me how they are often reductive, simplifying good and evil to make it okay for he good to kill the evil, but not the other way round. Bu I believe in redemption and mercy, and I think Naomi Novik does too. Both of her heroines do not win because they kill the enemy– they win because they refuse to see the enemy as only that.

This not only makes the climax of the story fantastically exciting, but it also makes the story more interesting. WE learn what has made the enemy that way. We see that they are part of their own stories. And crucially, we see the possibility for redemption. This is done particularly well in Spinning Silver, where Miryem is at the beginning not a great character. She is mean and venal. But she is still the heroine (although there are many more central characters in Spinnng Silver than in Uprooted) and we understand where she is coming from. As the story proceeds, most of the other characters are given complex and compelling motivations too.

Miryem, the main characters of Spinning Silver, is hard to like at first. She is  driven by money; she ‘makes her heart cold’ so that people  who are miserable about her taking their life’s earnings won’t be keeping her up at night. She faces adverse circumstances. The story is one of the few I’ve read in a fantasy where anti-Semitism is explored. Miryem stays interesting because she is a go-getter, and deals with things. She saves her family, and they resent her her for the cruel way she does it. Agnieszka, the main character of Uprooted is much more sympathetic: she goes out of her way to rescure her friend Katya, and is horrified at what they must do keep the world safe.

Another themetic idea that both stories have in common is this idea of balance. In Uprooted, the wood is not inherently evil; it is evil because it has been corrupted, because there must be space for people. An upset balance made the wood angry. In Spinning Silver, the elves are not inherently evil, either; they are merely afraid that their world will melt and leave them swamped.

This ties in to the theme of corruption being something to fear, but also to fix. Corruption is an out-of-balance force manifesting in a person. In Uprooted, the corruption is the literal green infection of the forest, a takeover by malevolent trees in mind and soul. In Spinning Silver, there is corruption by demonic creatures, but also by money (bearing the weight of anti-semitism). Again, corruption can be both forgiven and redeemed.

Novik’s writing is utterly visceral. When she write of her heroines wading through silver, reaching into another world, or being swallowed by trees, it is entirely based on sensation. Reading is an experience, and of course, that’s a good thing.

Neither of the main characters in Uprooted or Spinning Silver are rich or powerful people (at least not to start with), although peripheral characters have considerable power. However, even a princess character is constrained in certain ways, and so is a prince. Each of the character hs this iceberg quality; Novik makes the flat characters of a usual fairytale have depths hidden beyond what they seem.

These are fantasy novels, not mystery novels, but the slow weaving and unweaving of character reminded me of a mystery. Novik creates a map marked with tantalising uncertainty: here be Dragon, here be forest, here be ice, here be power. Her characters navegate the borders of these areas with grace, power, and courage, finding their own path in the stories told and the stories to come.

have you read these books? and what is the most creative retelling you have encountered of late? tell me in the comments!

2 thoughts on “Fervent Fairytales in Silver and Gold”