Hi Virtually Readers! Remember a few weeks ago when I reviewed Dr. Huxley’s Bequest, a really wonderful exploration of the history of medicine that covers a lot of ground? It’s a fascinating book, and Michelle Cooper, who wrote it, is one of my favourite authors. She is an incredible researcher, and uses her characters and stories to bring history–and now science–to life. She was gracious enough to let me interview her (which I promptly derailed by losing her email in my spam folder). If you want to learn about Tasmanian Devil milk and Michelle’s research process, you’ll definitely want to read the interview below. 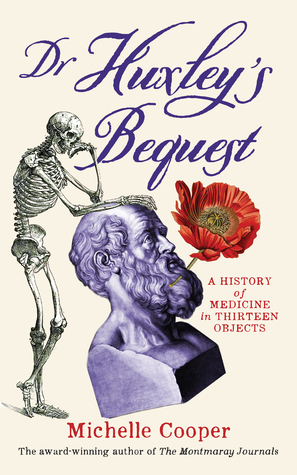 What was something you learned while researching Dr. Huxley’s Bequest?

It was fascinating to learn how art history intersected with the history of medicine. For example, I’d had no idea that Michelangelo hid anatomical illustrations of the human brain within his Sistine Chapel murals or that Vincent Van Gogh’s painting style may have been influenced by the herbal medicine he was taking.

We’ve talked about that in my anthropology class too–I was just studying it this afternoon! Can you share any interesting tidbits that didn’t make it to the final draft of the book?

Did you know that milk from Tasmanian devils can kill superbugs and may provide a cure for cancer? And that women with natural red hair have been found to be more sensitive to pain than other people? And that medieval scholars believed a stone found inside the head of a toad could cure poisoning?

I knew none of that but I’m sooo into it! How did you negotiate writing a fictional frame as a story as well as the information itself? Did you write the two components separately or together?

Oh, this book was SO DIFFICULT to plot. For the non-fiction bit, I started off planning a straightforward chronological history of medicine, beginning in ancient Egypt. But once I got past the Middle Ages, there was so much information that I had to narrow it down to a small number of topics and then weave some of those topics together. For example, there’s a chapter on anatomy, which explores how artists like Michelangelo and Leonardo da Vinci were also anatomists, which leads to discussions about body-snatching and the modern-day ethical dilemmas of organ donation. To demonstrate how convoluted this became, here’s my plan for the anatomy section: 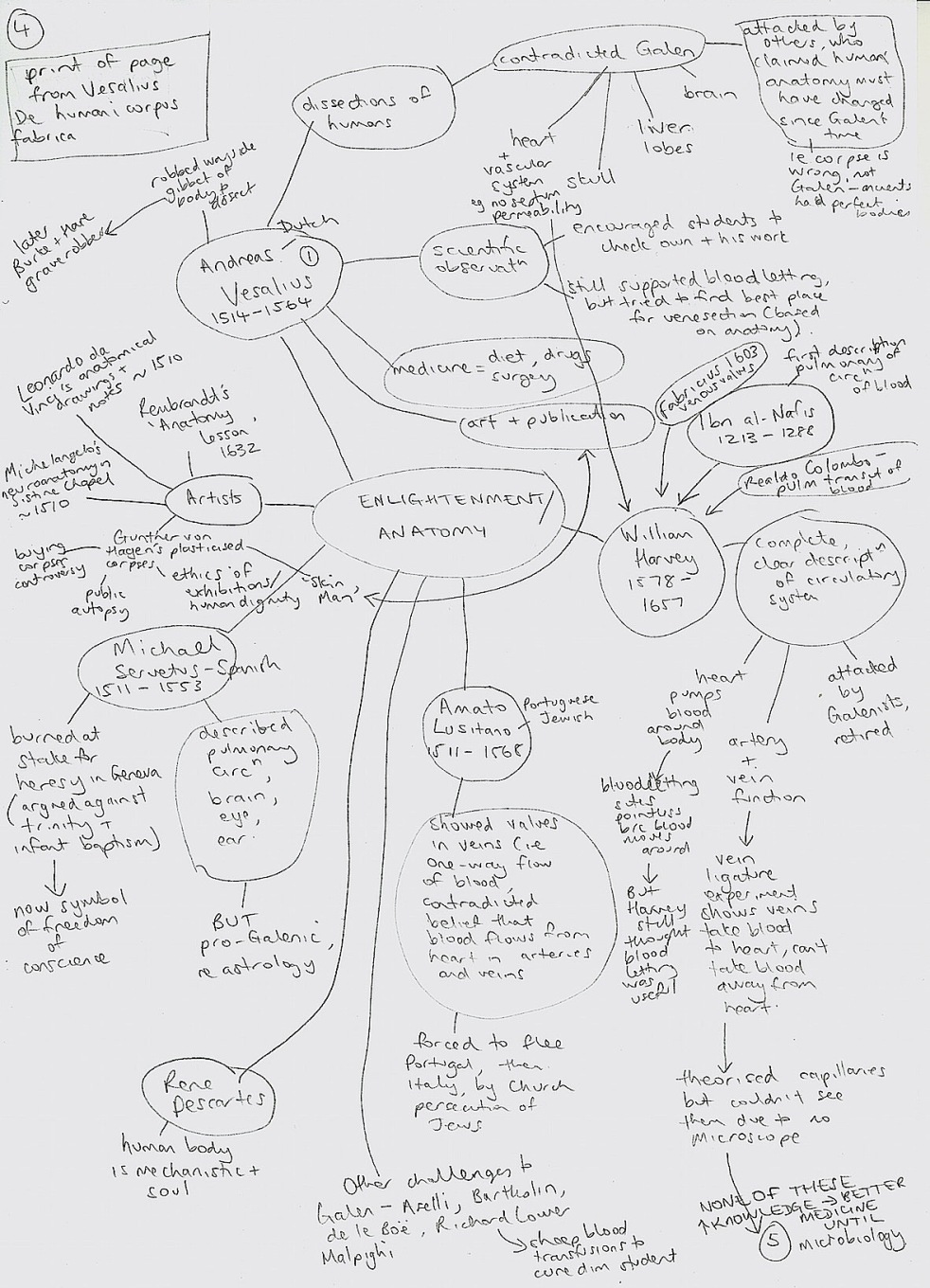 Then I worked out how the fictional framing story of Rosy and Jaz would fit into all this. Rosy had to solve the mystery of who was breaking into her room at night, while Jaz was hiding a secret about her family. I needed to drop clues about both of these mysteries throughout the book, then wrap them both up by the final chapter.

Frankly, this is a ridiculous way to write a book. I am never doing a book like this again. Well … not until I come across another fascinating non-fiction topic.

I’d call it Young Adult creative non-fiction, which is a genre that doesn’t really exist, which is why I couldn’t find a publisher for it. It’s a history of medicine for teenage readers in the form of a mystery story. With lots of jokes. And illustrations.

And it’s honestly so good! Have you gotten any good responses from readers of Dr Huxley’s Bequest? What are they?

I’ve had some lovely comments from readers so far. It’s been really nice to hear readers say, ‘I learned a lot, but it’s not presented in a dry, educational way.’ Some readers also appreciate that it’s girl-centred, that the cast of characters is ‘diverse’, and that the information isn’t just about Western medicine. That said, I don’t think this book is for everyone. It’s for thoughtful, curious readers who may not know lots about science or medicine but are open to learning more about those subjects.

You’ve written a number of different books–the conflicted identity of the Rage of Sheep, the intricate politics of the Montmaray Journals, and now the scientific wonderings of Dr. Huxley. What is something that all of your books have in common?

Hmm … they all have smart, determined teenage girls as their protagonists? I think The Rage of Sheep is the odd one out, because it was the first book I wrote and I had no idea what I was doing. It’s the most clearly autobiographical. All of my subsequent books have involved mountains of research about topics that intrigue me. If I don’t learn a lot from writing a book, there’s no point in me doing it. Each book has to entertain and interest me (and hopefully do the same for my readers).

Did any books particularly inspire you as you were drafting Dr. Huxley? Alternately, do you have any suggestions for readers who have finished Dr. Huxley and are interested in learning more about the history of medicine, or would like to read another quirky/genre crossing book?

Dr Huxley’s Bequest was inspired by Sophie’s World, a history of philosophy in the form of a mystery, written by Jostein Gaarder, a Norwegian teacher. I remember being fascinated by this book when I read it in the 1990s – it managed to present a lot of very complex information within an intriguing story.

Regarding books about medicine and science, I’d recommend anything by Ben Goldacre, who describes himself as a “nerd evangelist”. Start with his first book, Bad Science, which is very funny and smart and clear. I also like Trick or Treatment: Alternative medicine on trial by Simon Singh and Edzard Ernst, The Fever: How malaria has ruled humankind for 500,000 years by Sonia Shah, and Taking the medicine: A short history of medicine’s beautiful idea and our difficulty swallowing it by Druin Burch.

Dr. Huxley’s Bequest includes 13 objects. If you could pick one of those objects to have for yourself, which would it be and why?

There are some exquisite ancient Egyptian wedjat-eye amulets around. Unfortunately, the ones available for sale are probably fake and if they’re not fake, they’re illegal and also problematic for other reasons. So I think I’d choose a framed print of the skeleton illustration from De Humani Corporis Fabrica by Andreas Vesalius. It’s a lovely, thoughtful piece of art about human mortality.

Rosy and Jaz are the two main characters of Dr. Huxley’s Bequest. What have they been up to? Have they been investigating any mysteries or researching new things?

They have been investigating another topic, but it’s complicated and controversial so I’ve told them not to bother me with it. They can just argue about it amongst themselves

Thank you so much, Michelle!

Michelle Cooper is the author of five YA books, including the award-winning Montmaray Journals historical trilogy. Her latest book, Dr Huxley’s Bequest: A History of Medicine in Thirteen Objects, was shortlisted for the 2018 Young People’s History Prize. You can read more about Michelle and her books at www.michellecooper-writer.com .

For a list of stockists of Dr Huxley’s Bequest, see www.fitzosbornepress.com/books.html

What’s something sciencey you’d like to know more about? and have you read Dr. Huxley’s Bequest? you definitely should!