This book was not what I expected. I guess I vaguely skimmed the synopsis when it came out, then placed a hold on it and got it some weeks later, then didn’t read it, then waited weeks more for my hold to come through and finaaaaaallly read it a few weeks ago. Anyway, it turns out that it is not a high fantasy about an innkeepers daughter (which is good because I’m going to write that book) but instead an urban not-quite-fantasy about a girl living in a small town (as I found out from another reviewer, in the eighties) that she wants to leave. 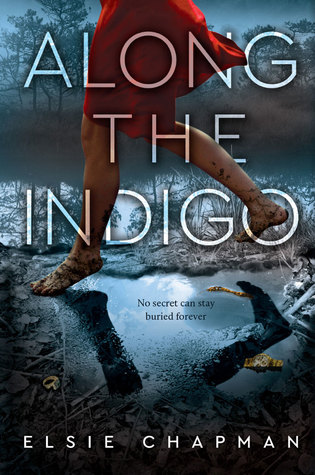 The town of Glory is famous for two things: businesses that front for seedy, if not illegal, enterprises and the suicides that happen along the Indigo River. Marsden is desperate to escape the “bed-and-breakfast” where her mother works as a prostitute—and where her own fate has been decided—and she wants to give her little sister a better life. But escape means money, which leads Mars to skimming the bodies that show up along the Indigo River. It’s there that she runs into Jude, who has secrets of his own and whose brother’s suicide may be linked to Mars’s own sordid family history. As they grow closer, the two unearth secrets that could allow them to move forward . . . or chain them to the Indigo forever. (blurb from goodreads)

And maybe you’re thinking that you’ve heard that story before, and you probably have. Along the Indigo still felt fresh and new to me, though. Firstly, there are the paranormal vibes. Marsden’s family can supposedly hear the dead, and one thread of the story is her wondering if that’s really true. There’s also the covert: an old legend says that if you commit suicide there, if you have the soil in your hands, you will not go to hell. So there are bodies all over the place in the covert, and to aid her escape, Marsden is a ‘skimmer’—she combs through the bodies for money. Elsie Chapman uses these pieces of this to question all kinds of moral questions in a really elegant way. Is it right to profit from the dead? Should we try to hear their stories? I liked how the superstitions also played with the continuing awareness of salvations and morality in the US—I read an article about how, even though fewer Americans would say they go to church, Christian values still permeate their culture.

Marsden’s mother is a prostitute, and Marsden is being pressured to do that work herself. This gave the story and edgy, uncomfortable undertone about bodies. Living bodies can be manipulated for money just as Marsden makes profit from dead ones, and to exploit your own body is something profoundly uncomfortable and strange, but also something that can be chosen. I don’t quite know my own thoughts on this topic, but Chapman dealt splendidly with the exquisite irony of Marsden’s aversion to selling her own body, even as she took from other’s out of necessity.

Marsden is trying to make a story of her life, and she cannot see that she is the story. Even if “not tale had ever covered being rescued from the shore of a river that was the colour of mud. Or a covert stained with old blood. Or a town that was pitted with greed.” Her story aches with all kinds of longing, and yet she still builds meaningful relationships and is able to examine shards of her own greasy history. I loved the generational vibe of the story.

I read this several weeks ago, and it’s now hard for me to remember if Along The Indigo had a plot. It had a gradual coalescing of characters in situations that made them care in painful ways. It had a bit of kissing. It had sweaty nights and promises from sisters and long tragedy. It had people who counted money, and delicious meals and relationships that grew like wild ginger—not wanted, but decidedly there, permanent and staining and spicy. It was gorgeously written. “There were no words by she heard them still. They washed over like water, like the wind, and she read them the way she might read the weather, a fever, a face.” The writing is endlessly evocative. And it cocoons you in the story, so you are the story, even as the plot unwinds.

One thing I particularly appreciated about Along the Indigo was the visceral setting. I have not been to rural California (or, like, the US). It is winter here. But read this “Dawn was still edging over into day—the sky for navy to lavender to the shade of robins’ eggs, the air from cool to an inferno” and tell me that it does not feel like you are there. Read this “The sky, sooty with clouds, shot through with white lightning like the beings on the back of a grizzled hand” and tell me that you soul doesn’t fill with the icy anticipation of a storm. Storms and dawns are things I have seen described a thousand times, and yet Chapman still makes them feel fresh. You experience the clammy air of the covert with Marsden. You feel the soil beneath your feet, the wind in your hair as she fervently cycles to an emergency, you wonder about psychics and parents deaths as she does. That’s what makes this novel so lovely and tragic and curious—it is an utterly embodied experience.

This novel is an absolute experience, and felt quite unique. I really appreciated the eloqnence and brightness that renders this story, and I’m very glad I read it. That said, the narrative is like the voices of the dead–enthralling because it is a necessity to move on and let go.

Have you read this one? what do you think? and what’s the weirdest book you’ve read? tell me in the comments!

2 thoughts on “Along the Indigo and Towards Me”