I’m convinced that Amie Kaufman and Meagan Spooner are two of the few people who make me amenable to sci-fi. It’s been over two years since I reviewed their last co-written novel, Their Fractured Light. Unearthed has many things similar to their previous trilogy: dual narration between a boy and girl, the worlds of space to explore, and great mystery (or perhaps even conspiracy). Unearthed is completely compelling; fast and angry and eager, just like the two characters at its’ heart. I wasn’t a huge fan of the ending and one character development thing, but apart from that, it was great. I have never watched Indiana Jones or Tomb Raider, the two comparison titles for this novel, but I loved the adventure and space setting of this novel, and the romance is a lot of fun too. 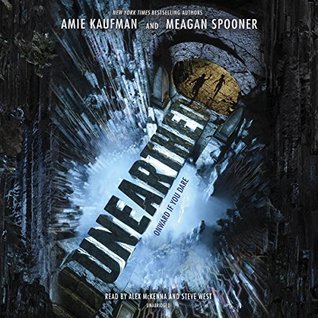 When Earth intercepts a message from a long-extinct alien race, it seems like the solution humanity has been waiting for. The Undying’s advanced technology has the potential to undo environmental damage and turn lives around, and their message leads to the planet Gaia, a treasure trove waiting to be explored.

For Jules Addison and his fellow scholars, the discovery of an ancient alien culture offers unprecedented opportunity for study…as long as scavengers like Amelia Radcliffe don’t loot everything first. Despite their opposing reasons for smuggling themselves onto the alien planet’s surface, they’re both desperate to uncover the riches hidden in the Undying temples. Beset by rival scavenger gangs, Jules and Mia form a fragile alliance…but both are keeping secrets that make trust nearly impossible.

As they race to decode the ancient messages, Jules and Mia must navigate the traps and trials within the Undying temples and stay one step ahead of the scavvers on their heels. They came to Gaia certain that they had far more to fear from their fellow humans than the ancient beings whose mysteries they’re trying to unravel. But the more they learn about the Undying, the more Jules and Mia start to feel like their presence in the temple is part of a grand design – one that could spell the end of the human race…. (blurb from goodreads)

Unearthed is a near-future sci-fi, and in this future, the world has gone to hell. Specifically an extreme water shortage. There’s also lots of poverty…in North America at least. Other places and languages are referenced, but their fates aren’t detailed because who cares about that part of the world? also it isn’t that relevant to the story. Anyway, all this creates an atmosphere of desperation. Amelia (or Mia) is desperate for technology to save her sister from bondage. Jules is desperate for answers to the mystery of the Undying, these weird aliens who have broadcast a message across the universe. Their paths cross.
While there is considerable external tension in Unearthed, driven mostly by the key fact of sci fi novels, that even in space, humans can’t escape from themselves, the more interesting tension is within. So while Jules and Mia have lots of exhilirating chases and big choices to make and puzzles of the alien and human variety to solve, the stregnth of the story comes from a more familiar trope, where there is a power imbalance between the characters because one is keeping a secret. You’ve probably seen this play out before, the the combination is popular for a reason.
Add a little romantic chemistry to the mix and you have an exhilirating ride and some characters who have to make friends… OR DIE. (no but seriously). Mia and Jules’s unlikely pairing, along with several other enemy encounters in the novel, make this an effective contemplation on the notion of enmity, shared enemies, and teamwork. But Jules and Mia aren’t really enemies. They’re always working together, and the way that evolves from grudging to vital is done exquisitely. Spooner and Kaufman are mindful of the power differentials, and the smart vulnerable boy with the smart savvy girl makes for an excellent combination (as always). They play with the knowledge gaps and secrets between the two, but the straightforward internal narration from both characters keeps things from getting too melodramatic, and the focus remains the adventure. As the characters become friends, I found myself immensly satisfied emotionally.
You know what I wasn’t satisfied by? (highlight for spoiler) Firstly, the ending. By the time they entered the ship I basically knew it would be a cliffhanger, and I was kinda pissed tbh, because it was too abrupt. I’m expecting a similar explanation to that in Unearthed, but I also don’t really care about any of this, because the plot changed so much with the revelations about the Undying. I knew that things weren’t as they seemed, and I wanted to point out to the characters that radiation dating can be botched by radiation.

The other thing that troubled me was both character’s understandings of violence. (highlight for spoiler) Jules decides to kill a man when asked to do so by Amelia, and makes a split second decision. The results of that decision trouble him, but he justifies it because he lives. Amelia *almost* takes someone’s life. When Javier does it for her, she is blase ‘I was gonna do it’ she says uncomfortably. But because that choice was taken out of her hands, we don’t know if that is the truth or not. That was an incredibly cowardly narrative choice by Spooner and Kaufman, to rob her of the independence of that choice, and I was immensly disappointed by it. Neither character questions how they ended up in a world, in a place, where having to kill someone, being able to do that, is a source of pride.

There’s so much that this novel could have said about violence, but it remained quiet, a choice I see across high stakes adventure YA, and am continually frustrated by.
Just as a final note, the audiobook is done really well. Sean West makes a perfect Jules. The producer’s attention to detail really shows–for instance, Mia says ‘niche’ like an American and Jules like an Englishman, which delighted me.

How do you feel about sci-fi? have you read this book? what did you think of the ending? let me know in the comments!

8 thoughts on “Unearthing (mysteries and more)”