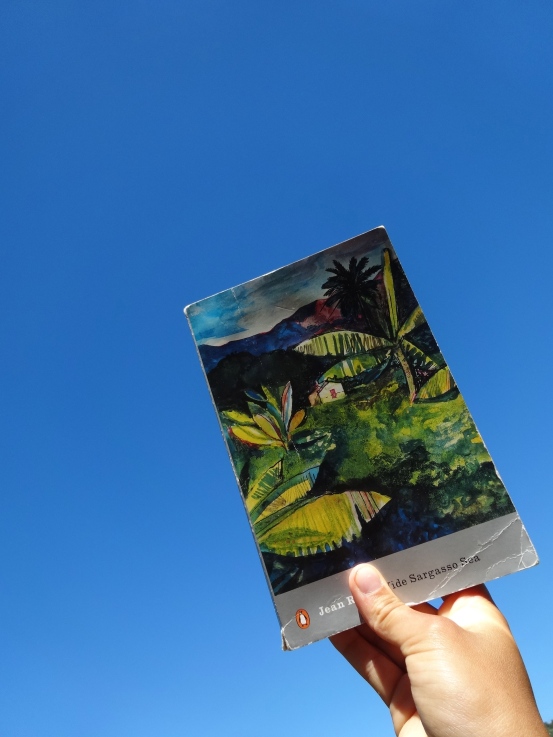 You’ve never heard of it? I first heard of it a few years ago, when my English teacher mentioned she’d read a Jane Eyre inspired book that she’d really enjoyed (at least, I think she said that. I mostly noticed the title). I’d read Jane Eyre the year before, but it didn’t really sink in that this was something I should read. Then, last month, there was a book fridge/free library thing at the bottom of the road where I was living. I noticed that among a lot of low quality romances and random books, there was this, and thought I might give it a try.

As I read, I got to a point where I was so entranced by the incredible language and style that I just had to underline something, which I normally never do. Partly inspired by Words in Deep Blue, where people leave notes for each other in secondhand books, I began to underline phrases I found particularly beautiful or interesting. Soon I was adding little notes, then bigger ones, adding boxes, commenting on recurring themes, asking questions, and basically becoming a dreaded book graffiti-er. I ended up leaving before I could return the book to the library*, as I hadn’t finished it. I gave a different book back instead, and kept lovely Wide Sargasso Sea all to myself.

*not a proper library; I wouldn’t deface a library book.

Anyway, enough of the story. Let me talk about why I loved Wide Sargasso Sea. The main reason, of course, was the language. It’s definitely more dense and confusing than most books I read, with sometimes a stream-of-consciousness narration, lots of repitions of words, metaphors and changes in tone.

‘’[the saint they learned about at school] lived later on but still in Italy, or was it in Spain. Italy is white pillars and green water. Spain is hot sun on stones, France is a lady with black hair wearing a white dress because Louise was born in France fifteen years ago, and my mother, whom I must forget and pray for as though she were dead, though she is living, liked to dress in white.

‘The convent was my refuge, a place of sunshine and death[…]’

The story is set in the 1830s, following Antoinette, a white descendant of colonisers in Jamaica. She’s married off while still quite young to an unnamed British man looking for a large dowry. There are rumours about her and her family, and she slowly goes mad. It sounds like a simple story; but it’s not.

The author had moved from Jamaica to live in London when she was quite young, and comments on the difference between Antoinette and her husband’s culture and place they belong, as well as the locals, are key to the story. Antoinette has never been to Europe, but she’s also considered an outsider by the locals because she’s the daughter and granddaughter of slave-owners and colonisers. I love books about belonging, and this was totally unlike my story but also totally understandable.

There are confusing thematic elements; apart from belonging, there are also references to obeah, a kind of witch-doctory, black magic thing that probably originated in West Africa and followed the slaves to the Caribbean. There’s an obtuse exploration of the aftermath of the Emancipation Act that forbade slavery in 1833. Time and the way it passes and dangles is woven through the timeless setting of the honeymoon island where things happen yet not quite. Building on this is the concept of memory and forgetting and déjà vu, woven through Antoinette’s madness.

“ I walked past the room where they brought me yesterday or the day before yesterday, I don’t remember. Perhaps it was quite long ago […]”

“Or was it the song about one day and a thousand years?”

Underlying the text is a kind of feminism. In a subtle way, Rhys seems to be commenting on the way societal expectations of women—terrible ones that deem them to be property and worthless and do nothing except marry—are what lead’s to Antoinette’s downfall. She certainly doesn’t paint the husband in a very flattering light, and it’s hard to see where the line is between her opinion’s and her character’s, especially with the first person perspective and the setting more than a hundred years before she wrote the book. But in its own way, perhaps Wide Sargasso Sea is feminist, or at least commenting on the negative aspects of women’s place in society. Strangely, that’s what some people think Jane Eyre is about too; she tells the reader she married Rochester, not the other way around. And she only truly comes into her own once she isn’t dependent on him and able to approach him as an equal.

This review is far too long and confusing. Wide Sargasso Sea is probably one of the best books I have ever read, and I give it five stars.

Have you ever gone to a free library? What’s a book that changed your life? Do you like classics? Have you ever read something your teacher recommended? Are you keen to read this?