Some of you may remember that a few weeks ago, I resolved not to read fiction for Lent. Three and a half weeks later, I’ve read seven books (way fewer than normal), but mostly enjoyed them. I thought I would share my reviews for two of the books I read: Smart Girls: Success, School, and the Myth of Post Feminism, an academic book about a study of girl’s challenges in school with the idea that sexism no longer exists; and When Breath Become Air, a very famous memoir from a neurosurgeon dying of lung cancer. These aren’t quite like my normal reviews, more like my personal reactions; regardless, I hope you enjoy this! 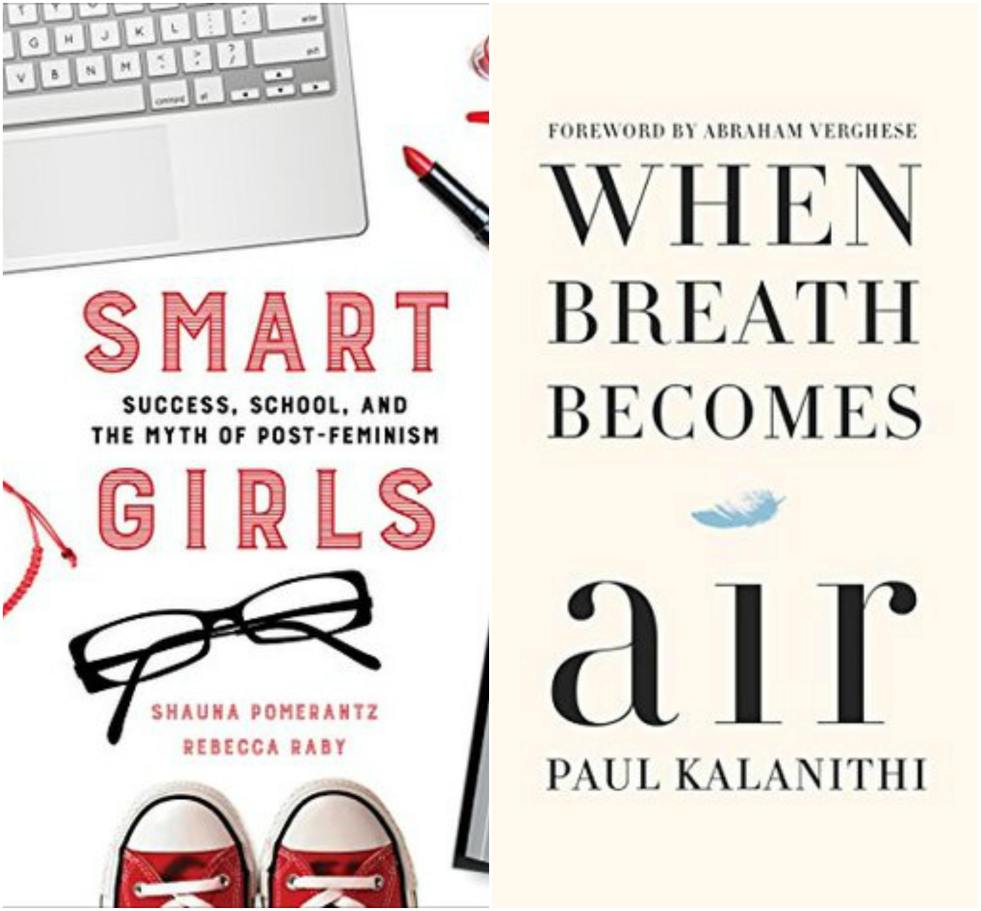 This book feels unfinished.
It should feel unfinished, because the author died.
It doesn’t work up to any conclusion, in particular, and numerous ideas of responsibility and death and life and love are used, but not quite completed.
But that feels right.
It’s the kind of book that I thought my mother would like, and she read it a few weeks ago, and now I’ve read it.
It made me weep; not anything, particularly, that Paul had written, but Lucy’s epilogue, her raw grief, her exquisite grief sodden writing a perfect, tragic accompaniment to Paul’s crisp, introspective missives. And the introduction. I read it again, after I had finished; Varghese reminded us of who Paul could have been; who he already was. Of who we can be; of who we already are.
“We know what we are, but not what we may be,” declares Ophelia, in Hamlet.
Yes.
Paul knew who he was, and he knew the thousand tangible possibilities for who he could become (which would undoubtedly involve more over-achieving; seriously, a degree at Oxford and Harvard and he would have done a nice tour of the elite institutions of the English-speaking world. But it was not to be.)
Cancer is unfair, and I haven’t really been personally struck by it; but Paul is honest, and tragic, and aware; and so, despite the sorrow, this is a story tainted with life rather than death.
Perhaps death makes us more aware of life; at any rate, Paul, in his honesty, reminds us that time matters.
Would I have liked it if he quoted less extensively from the Western canon, most of which I hadn’t read? Yes. Would I have preferred to know more about how he dealt with his identity as an Indian American, as a man of faith? Yes.
But this is an unfinished book, and it is filled with truth, not truth that can be expressed in a single aphoristic quote, but a truth that can still resonate with someone less than half his age, who has no interest in medicine.
His writing is wonderful. Read it; think, cry, know that you are alive.

2. Smart Girls: Success, School, and the Myth of Post Feminism

I read this book when I needed it. That’s always the best way to read a book, because it’s personal, and relevant and it feels so much more important.
I needed it for two reasons: First, I was in the midst of writing a paper for my own research project, which is entirely different from Pomerantz and Raby’s study, but the methodology is fairly similar, and reading this definitely helps me know how to put my own research together. But the other reason, and probably much more interesting to whoever is perusing this review, is that it came at a time when I was contemplating the cost of my own label of a “smart girl”: what it has cost me, what it has bought me.
I’m definitely not a “supergirl”, as the first chapter explains (because I’m not popular). But being intelligent is absolutely part of my identity; I see myself as capable, and I consider academic achievement important, and like all of the girls in this book, I struggle with insidious sexism. Probably the biggest indicator that I am a “smart girl” is that I read this book–an academic book published by a university press–for fun. Yes, really, though admittedly I did not read the last 40% of the book, which was notes and citations.)
And what does it mean to me to be a smart girl? It means that people ask to look at my homework; assume that I will do well on things automatically, without working (though I definitely work hard). It means that I cry over calculus, and feel frustrated when I get things wrong, like a normal person. I hold myself to a standard of perfection; and I work everyday, not just at schoolwork, but at forgiving myself for making mistakes. It means that I report it, most of the time, when people cheat on tests; and I am not popular, though I am comfortable with myself, and I still don’t know whether those two things are linked. And now I’m about to graduate high school, and face what it means to be an intelligent woman in the world beyond a small high school. And I’m so ready, and so scared.
This book doesn’t perfectly reflect my experience. But it does remind me that I’m not alone, and that the legacy of the feminist movement (seen by so many to be over; that equality has been achieved) is borne by the young woman of today. It reminds me that I am privileged, and that I am naturally existed, and that my familial support is one of my many resources. It reminds me that there are many self contradictory aspects to education, and that yeah, my gender has something to do with it, and that education is a battleground, and that sexism exists, and is felt in many ways.
It reminded me to embrace and challenge the stereotype of smart girls, and not to forget how lucky I am. (Yes, thanks Doctor Seuss.)
It’s also well researched and clearly explained and fascinating; if you’re up for an academic book (which, let’s be real, you probably aren’t) I recommend this one.

Okay, so these reviews weren’t quite as mini as I hoped…. But tell me about your thoughts on nonficition! And have you ever read an “academic” book, and found yourself really enjoying it?