So I read Their Fractured Light. (That is, I listened to the audiobook) My heart exploded like a supernova (haha). you should read it, by the way, because it is fabulous. But maybe read the other books first. Note: This will contain spoilers for These Broken Stars and This Shattered World) 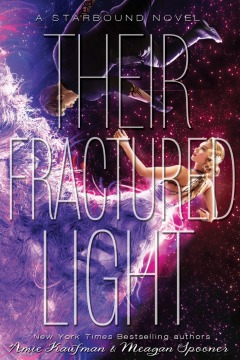 A year ago, Flynn Cormac and Jubilee Chase made the now infamous Avon Broadcast, calling on the galaxy to witness for their planet, and protect them from destruction. Some say Flynn’s a madman, others whisper about conspiracies. Nobody knows the truth. A year before that, Tarver Merendsen and Lilac LaRoux were rescued from a terrible shipwreck—now, they live a public life in front of the cameras, and a secret life away from the world’s gaze.

Now, in the center of the universe on the planet of Corinth, all four are about to collide with two new players, who will bring the fight against LaRoux Industries to a head. Gideon Marchant is an eighteen-year-old computer hacker—a whiz kid and an urban warrior. He’ll climb, abseil and worm his way past the best security measures to pull off onsite hacks that others don’t dare touch.

Sofia Quinn has a killer smile, and by the time you’re done noticing it, she’s got you offering up your wallet, your car, and anything else she desires. She holds LaRoux Industries responsible for the mysterious death of her father and is out for revenge at any cost.

When a LaRoux Industries security breach interrupts Gideon and Sofia’s separate attempts to infiltrate their headquarters, they’re forced to work together to escape. Each of them has their own reason for wanting to take down LaRoux Industries, and neither trusts the other. But working together might be the best chance they have to expose the secrets LRI is so desperate to hide.

I love the character development, the masterful incorporation of elements from the other books (yet still managing to be fresh) and the focus on themes of humanity, trust and violence.
The characters in this book are the BEST. So in the second half of the book we get to see lots of Tarver, Flynn, Jubilee and Lilac, but before that there is just Gideon and Sofia. They both have *pasts* and *secrets* and it’s basically the best as they learn to put up with each other. I really liked both characters.  Gideon is skilled yet isolated, and  is trying to understand how he can integrate his online persona and himself in real life, along with good intentions. This was shown most strongly  when he realised that Towers was Sofia. Though he was manipulated into it, the sense of betrayal– at himself– was really powerful.( (<– highlight for spoiler) Gideon was a really interesting person who kept changing and showing more of himself. His skills were also really useful, and complemented Sofia nicely.

Sofia has trust and anger issues for obvious reasons, and a lot of hate ringing her. Yet she is also intensely vulnerable and so lonely She is so talented at conning, but the urge to show her reality is a fascinating one. Her quest for vengeance and it’s culmination were awesome. I loved how she learned to accept herself and her many faces over the novel. All the others had problems too, but I think it takes Gideon and Sofia the longest to truly trust each other. That was one of the most powerful things that I LOVED in Their Fractured Light. Of course, I loved seeing the rest of the ensemble, and their relationships to each other apart from the romantic ones (Lilac and Gideon, Tarver and Jubilee, Flynn and Sofia) also play out in here. Tarver was heartbreaking to listen to, and I loved how everyones story and narrative voices were finished, and how they changed over the story.
Their Fractured Light works really, really well as a wrap up novel. This was especially because of the whispers (and btw their audiobook acting is amazing) Through the whispers chapter pieces their entire history comes to life, as well as knotting the threads between all of the characters, and that writing, as well as being stunningly beautiful, really shed light  on who they were and how they became that way. I especially liked the focus on the different groups of whispers in different places. All the parts that happened in the previous books– the smothering of Avon, the issue of Elysium, the crash of spaceships, and the characters– it’s all connected and I loved listening to Their Fractured Light (also small moment of appreciation for the titles because they’re excellent) LaRoux Industries evil plans and the man behind them are also illuminated, and that also linked the plots.
There are some pretty harsh things that the Starbound Trilogy deals with. Like the evil of corporatism, the idea of invasion (on both Avon and into hyperspace), and the role of violence. All of these, plus ideas of trust and humanity came up in Their Fractured Light. The way the themes acted as a uniting feature was also really fantastic. The emphasis on trust was really important. Gideon and Sofia keep pretending to trust each other, but it’s only when  they leap into the rift that they really believe in each other. The inching towards honesty that both had to experience, and the amazing writing behind it really belied their characters. There’s also a lot of violence, and the idea of innocents, especially the way that they’re always in the midst of conflict, was addressed pretty perfectly. And then there is the theme of humanity. This came up a lot, in the chapter interludes and factored into And of course their choice at the end With *a certain person* struggling with being human all of the characters have to understand what compassion and heroism and gentleness (that is, humanity) is and why that is unique (and btw the last chapter works so well with that) There are some impassioned speeches at the end that tied that nicely together, especially with the idea that people like the blue eyed man can be horrible yet lovable as well.
This is honestly one of the best series conclusions I’ve ever read. It ties things together, isn’t easy or expected, and ultimately made me really really happy (and sad because it’s over).

Have you boarded the Starbound Spaceship or read the intense thrillride that is Their Fractured Light? What is your favourite series conclusion? Tell me in the comments!

8 thoughts on “My Shattered Heart, Their Fractured Light”