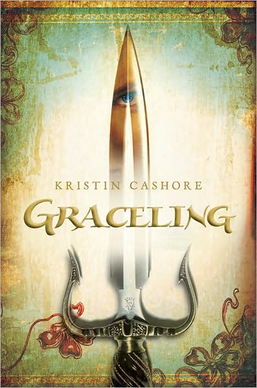 My Blurb: Some people in the world are born as Gracelings, meaning they are incredible skilled at something as mundane as swimming to mind reading. Katsa is the king’s niece and a Graceling. But that’s not all: her Grace is killing, and she’s forced to be the king’s skillful thug, who and threatens any lords who misbehave. When Katsa meets Prince Po in a dark courtyard in another kingdom, things change. Can Katsa learn that she’s more that a brutal, terrifying tool?

This book was truly excellent. Even though Shanti forced me to suggested I read this a while ago, I was rather put off by the blurb.

Firstly, I’ll discuss the characters. Katsa was very round, not just good or evil. Her background was an intricate tapestry; the palace she’d grown up in, everybody’s fear of her, her few friends (although she wouldn’t have called them such) like Raffin, her cousin, Helda, her maid, and Oll, the spymaster. Each of these secondary characters were just as round and fascinating as the MC, even if they didn’t change much over the novel’s course.

Katsa was easy to connect to, even though (obviously) I don’t have a green and blue eye, I’m not great at killing people, and I’ve never been inside a castle. Prince Po was also a great character; he was brilliant and funny, but secrets of his own and various conflicts made him really develop and intrigue the reader. His Grace of fighting totally matched Katsa, and the way the help each and work together was felt natural and wonderful.

The bad guy (read it to find out who he is) is also interesting, although he did seem to mostly be the bad guy, and not very round. Other secondary characters like Bitterblue and Skye were well developed and enjoyable too too.

What about the setting? Set in a ‘world’ with 7 kingdoms and 7 unpredictable kings, each pursuing various selfish goals, this was also entirely engrossing. I felt the world building was interesting without infodumping, and the characters all fit right in. We didn’t find out about all the kingdoms, but Monsea, Lienid, Middluns, and Sunder (the kingdom names weren’t to creative: middluns=middle kingdom, sunder=south, Wester=west, etc.) each had a different culture. I liked the medieval feel and the lack of magic (with the exception of Gracelings). The forests, mountains, and travelers inns all, again, created a beautiful background for the characters to go running (and riding! Yay horses!) around on.

The plot was good, not all surprising, but sound. The ratio of action: dialogue: politicalness: survival (I was reminded of Bear Grylls) balanced well, so I was never bored, but never like ‘if they get in another fight I’m going to throw this book out the window’. There were a few twists and surprises, and quite a few scences where I just couldn’t put it down.

However, the romance annoyed me a little. I mean, I think they suited each other, but they would have been great best friends, and once they made their decisions, they moved very fast, which didn’t exactly fit Katsa’s character, I thought. But then they were kind of adorable.

In terms of general enjoyableness and being well written, Graceling passed everything. I really liked it a lot.

So, today I decided that using only 5 stars is overrated. And because I’m a special snowflake, each of these ratings is out of 6. Because why not?

Have you read Graceling? What are your favourite fantasy books? Do you like this style? What are you reading? (I need suggestions here, guys)