I read The Last Time We Say Goodbye. I loved it.  now I shall attempt a review. 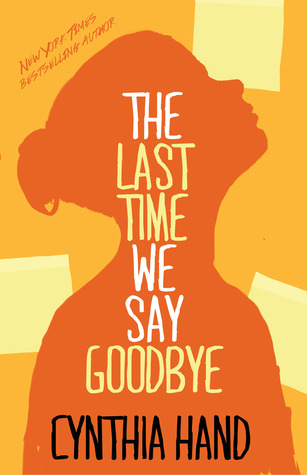 The last time Lex was happy, it was before. When she had a family that was whole. A boyfriend she loved. Friends who didn’t look at her like she might break down at any moment.

Now she’s just the girl whose brother killed himself. And it feels like that’s all she’ll ever be.

As Lex starts to put her life back together, she tries to block out what happened the night Tyler died. But there’s a secret she hasn’t told anyone-a text Tyler sent, that could have changed everything.

Lex’s brother is gone. But Lex is about to discover that a ghost doesn’t have to be real to keep you from moving on.

From New York Times bestselling author Cynthia Hand, The Last Time We Say Goodbye is a gorgeous and heart-wrenching story of love, loss, and letting go.

This book was excellent (4.5 stars because I can’t decide). The way it dealt with grief, the complexity of the characters and the plot of forgiving yourself all worked so well.
Grief is difficult. I’ve read enough books with heartrending, beastly cliffhangers to know that I am lucky that I have less personal experience with it than Lexie, but the writing in the Last Time We Say Goodbye shows it- raw, painful, real but also something that becomes part of who you are and eventually leaves. Lexie and her parents changing relationships, as well as her relationship with Steven, is shown in how they each deal with grief and each other. They learn that it’s not their fault even though it is in some small ways, and I liked that. I really felt how Lexie was through her experience of grief- her fear of getting it wrong, her fear of being wrong, the fact that she was trying to find a new place in the world. I don’t think her therapist was really necessary, except as a plot device, but those conversations were important too. And her friends were awesome for the record.
Lexie is such an interesting character to read about. She had what was missing from Pearl in the Year of the Rat (which I read last week) . She experiences the world and details and numbers and the little pieces- parts of Ty’s room, numbers and statistics. She’s a very detail oriented person, and Hand’s beautiful writing really demonstrates that. The other characters were pretty periphery, but the flashbacks helped me to get how that knew each other. The journal entries were quite vital, and the way she doesn’t quite know how to deal with the hole in her life (the hole of grief, another element of writing which I loved) made me utterly empathise with her.
Lastly, I liked the plot. The ghostly element was not as important as I expected, but it was still an interesting idea to read about. I liked the physicality of the cologne and what it represented, and how, even after his death, through the letter and the note and the text. The journal entries were a nice contrast too, and they embodied the passing of time. The ending also wrapped up perfectly, just enough to feel satisfied without the characters lives being over. I didn’t actually think that the Phil and Damian plotlines were necessary, or even that whole bike ride thing, but I do get why they were there- so Lexie knew that she wasn’t aloneThe way that the plot showed that family and friendship is more important when you’re afraid was wonderful.
So there were a few unnecessary elements, but overall, The Last Time We Say Goodbye is a brilliantly written, life-affirming novel with wonderful characters and a lot of sadness and a bit of happiness. The emotions are powerful and I really recommend it!

Have you read The Last Time? What did you think? Do you find it easy to connect with stories of grief, or confusing? tell me in the comments