This weekend I read two books by E. Lockhart. First of all was The Boyfriend List.  I would recommend it if:

The other book I read by E. Lockhart was We Were Liars, which was her newest novel. It was beautiful, incredible, dazzling, heartbreaking, and surprising. The basic summary is: From the outside, the rich and influential Sinclair family seems perfect. They spend every summer on their private island. But within the family is something rotten that reeks of power struggles and a tragedy nobody wants to admit. When she was 15, Cadence, the oldest grandchild, had an accident that has since caused her horrific headaches. She lost most of her memories of that summer. But as she pieces together what happened to her and her group of cousins and her love, called the liars, she realises that what happened was truly worse than she could have imagined. And it might have changed something forever…. 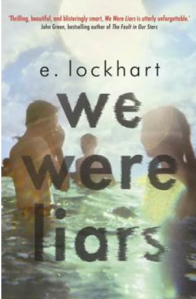 If that doesn’t entice you, I don’t know what will. A few other things:

The other thing that happened was that Shanti, Rose(our friend) and I went to watch ‘If I Stay’, based on the novel by Gayle Forman. It has been quite a while since I read the book, so it is hard to compare, but the movie was really, really good.

I liked it more than The Fault in Our Stars because their romance and neither of the characters was perfect (ahem, Gus) and it was more about how love, of her family, of music, of her best friend, of her boyfriend, made her make the decision of whether to stay or go. One sentence summary :17 year old mia is in a car crash where her family dies, stuck in a coma, she reflects on events on her life that eventually help her to make the decision on whether to live or die.

I highly recommend it.